My favourites post proved to be quite popular last month so I thought I would try to continue with them. This month has been a little interesting for me, so I don’t have a lot of favourites to list, but here are the things I have loved this month.

I have been decorating my room and whilst I am working on a series of blog posts about it, that may take a while as I am being pretty slow with my room so I might talk about a few things in favourites posts. 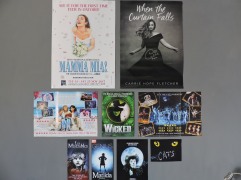 In the past year I went to see Mamma Mia and Carrie Hope Fletcher in concert and at both events I bought a poster. The other posters in my display are either leaflets that were free at theatres or pages I have cut out of theatre magazines. All of the posters are from musicals that I love and I’m really pleased with this display. I think it looks really nice on my wall and is a feature that reminds me of seeing these shows and the amazing music in them, both of which make me happy to see the display every day. As I see more shows, the display may grow, but for now, I love it.

For ages I have wanted to make a new scrapbook because I have a box filled with tickets and memorabilia. Then at uni, I printed lots of photos to decorate my room and wanted to put them all into a photo album now that I have moved out of my first year flat. A couple of weeks ago I finally looked up photo albums on the WHSmith website and saw that they have some really nice ones in at the moment and also had an offer on them when I looked. I went into the shop and picked out these two albums which I am really pleased with. I could not wait to start making my albums and I decided to combine my memorabilia with the photos so these are sort of photo albums and scrapbooks but I like having it all together. My albums are the large ones and are self-adhesive pages.

Part of what inspired me to get moving and make my photo albums was seeing a blog post by TheAnnaEdit. She wrote all about the albums she uses and also wrote about using a label maker. I have often thought about getting a label maker but was usually put off by the price, I know they’re not that much, but I was not sure I really wanted one. Then I followed the link on the blog post to the one Anna uses and this Dymo Omega is an embossing label maker and I love the effect of the labels. The price is pretty good for a label maker and although you have to buy the rolls of tape on top of this, it comes with one already fitted, and you can find some reasonably prices rolls on amazon.

Sadly, my last reusable bottle got really battered and the outside was looking really damaged. So, I decided to have a look around on amazon for a new one and I have to admit that it was the branding and price of this bottle that appealed to me. I read the reviews and information and it sounded really good. Also, my last bottle was mostly damaged on the bottom and what appealed to me about the moon bottle is that the colouring stops and the bottom is simply the metal which means it is less likely to look battered over time. I have only been using this bottle for a week or so but so far it has kept my water really cool.

This is a classic film and I have seen it many many times but I wanted to put it in my favourites this month. It was on television, as was the second film which is also brilliant, and I wanted to include it here because this is one of my all-time favourite films and I hope everyone watches and enjoys it. In June, Reese Witherspoon also announced that there is a third film in the works and I am very excited for that as I know she will make a great film, and Elle Woods is a great character.

I was pretty late to this show, although I have been watching it for a year or so now. In June I enjoyed watching it again now that I am home from uni for the summer and I easily get hooked back on this show. It is such great viewing and if you haven’t ever seen an episode I recommend giving it a watch.