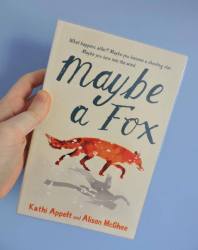 Kathi Appelt and Alison McGhee are both award-winning children’s authors. Appelt’s most acclaimed work is The Underneath which received a Newbery Honour and was a National Book Award finalist. McGhee’s novel Someday was a New York Times bestseller.

I had never heard of either author before hearing about this novel, and it was through another author that I heard of them. I was watching a YouTube video on author Carrie Hope Fletcher’s channel, ItsWayPastMyBedtime, when she mentioned this book and talked a little about what it is about. I made a note of it and felt that maybe I would read it at some point. Then, whilst volunteering in a local library, I spotted it on one of the shelves. At that moment I was waiting for a couple of books to come in that I had ordered so I thought I would read this one in the meantime.

The novel is set in a town in America, but we focus mainly on the area around Jules’ house. This consists of the house, the garden, the forest and the Whippoorwill River, the Slip and the Re-emergence. Occasionally, part of the novel is set at Sam’s house or at school, but these are only small parts. It is the forest and the river which are the main settings of the novel because these are where most of the important events happen.

I think that there are three main parts to the plot of this novel. The first, and primary part, is about Jules. We first meet Jules with her sister, Sylvie, but soon her world is turned up-side down. Sylvie goes missing very early on in the book and Jules must find a way to come to terms with what has happened. She lost her mother when she was young, and now there is only her father. The second part of the plot focuses on a fox cub named Senna. Jules and Senna have a special connection that develops with the plot, and Senna discovers this whilst also learning about the world around her. The last part of the plot is made up of a few sub-plots. These sub-plots all feed into the main story in some way and add new elements to the novel.

Just as there are three plots to the novel, the novel is also split into three sections. It is a little difficult to see why each section is split as it is, but I have tried my best to work it out. The first part of the book focuses on the plot of Sylvie’s disappearance whilst also providing a lot of background information into the characters and the setting. Part two of the novel sees Jules learning to cope with what has happened to her sister and continuing with her life, which includes going back to school. It is in this part that we are introduced to the fox family and begin following Senna on her journey. The third and final part of the book is where the tension begins to rise and we can feel that it is building up to something. Jules wants to venture back into the forest to find a grotto and also because she is intrigued by the fox, but her father has told her not to leave the garden around their house because of what happened to Sylvie and the dangers of the forest. It is also in the last section that Jules thinks about the wishes that people around her have made and how those wishes have affected their lives.

Jules is the primary character as we follow her the most and she is the centre that all the other characters can be linked back to. I felt a lot of sympathy for Jules as she struggled to adjust to life without Sylvie in it and to learn how to express her grief. She has little memory of her mother and has always relied on Sylvie to tell stories and to almost be the leader as the elder sister. So when she is left alone it feels a little as though she becomes lost as she is so used to always having Sylvie with her.

Sam is Jules and Sylvie’s friend and he too has to deal with his grief. However, his role in the novel is both to be there for Jules as much as he can be, but also that he has a wish to see an animal called a Catamount. This wish of Sam’s is one of the sub-plots and is cleverly linked to Jules and her situation.

Another character that is used for a sub-plot is Sam’s brother Elk. We find out that Elk was best friends with a local boy named Zeke and that the two of them went away together with the army. Sadly, only Elk returned and he has been very different since. Seeing into Elk’s story gives insight into what Jules is going through and the two characters are able to relate to each other a little and we feel that their paths cross over as they both learn to cope with what has happened in their lives.

The last character I would like to talk about briefly is Senna, the fox cub. I felt like this character was used so cleverly throughout the novel and I loved the idea of her link to Jules and how she helps Jules in dealing with her grief. Senna and her spiritual connection adds an element almost of magic to the novel and it was a very interesting idea to explore with the characters.

I felt that the end of the novel was very clever and it was built up to really well by the authors. I was really hooked in and once I started part three I did not want to stop reading until I knew what had happened. The ending felt right for the novel and was very interesting if a little sad.

I would recommend this book, purely because it is quite an easy read and the plot and the way all the characters are tied together is really clever. I certainly got a more interesting plot than I had thought I would and I was pleasantly surprised with how gripped I was to the book. The book also is a really good way to look a little at grief and how it can be difficult to deal with. I would say the book would suit the ages of 12 and up maybe, just because it does look and death and that can be a hard topic, especially when grief is focused upon.