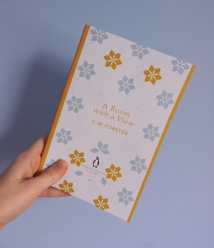 ‘Sundrenched and optimistic, and exploring many issues at the heart of Edwardian life – radical thinking, women’s suffrage, the constrictions of English social rules – this is a brilliantly witty love story.’

E.M. Forster is known, above all, for being a writer. His most popular works include A Room with a View, Howard’s End and Where Angels Fear to Tread. London born, Forster was a pacifist and signed up for the International Red Cross as he was an objector to the First World War. He travelled well throughout his lifetime and visited the likes of Alexandria, Egypt, India and many European countries. His written works are extensive and he even wrote a Libretto for Britten’s opera Billy Bud.

This novel is one of the 10 classics that I bought for my 18th birthday. I tried to choose one by each author so that I could try a variety and something about this book appealed to me when I read the blurb as I already enjoy romances and am interested in the role of women. I had heard of Howard’s End when I studied Educating Rita for my English GCSE so I thought a book by Forster might be a good addition to my bookshelf. Additionally, a teacher at school recommended that I read the book and I knew that the English Literature A Level class had read it and many really enjoyed it.

The plot of this novel focuses around Lucy Honeychurch as she meets new people and becomes shaped by them and the events that unfold around her. Part 1 sees us travel with Lucy on her first trip to Italy with her cousin, Charlotte. We are quickly introduced to the majority of the key characters as they are the people that Lucy finds herself staying with. Right at the beginning we see the contrast between the people Lucy is meeting (the Emerson’s) and the people Lucy is used to (her cousin). Between the two parts of this novel there is clearly a gap which means that for a little while the reader is piecing together what happened. Some characters help us to fill in the missing information, but what we really want to know from Lucy is cleverly withheld. In part 2 we return home with Lucy to her family and quickly experience the contrast of the two places, both in looks, but also in the behaviour of the people. This contrast is highlighted by the two men courting Lucy and her struggle to choose not only between the men, but the lifestyles that come with them, is often evident.

Forster chooses to narrate the novel in the 3rd person which I find very interesting. As the novel focuses mainly around Lucy it would have made perfect sense to use the 1st person but the 3rd person allows Forster to give us whatever information he chooses. This means that we can know the thoughts of other characters but also, information can easily be withheld to keep the reader guessing. What I liked about Forster’s narration, was that after an episode he would sometimes make a comment himself to reinforce to the reader what had just happened and the effects it may have had.

I found the character of Lucy to be the most relatable. She is growing up and discovering who she wants to be but is aware that she does not want to cause upset with her choices and opinions. It often feels that she is caught in the middle of two worlds and is trying to negotiate a way for them to co-exist. Throughout everything she tries to be positive but sometimes it is clear that what is happening is becoming too great for her to handle and she becomes unsure of where to turn. A lot of the characters try to influence her if she turns to them and I felt sorry for her as having other people steering her must have made her even more confused about what it was she actually wanted.

Charlotte is a character that I was not too keen on because whilst in Italy, she played a large part in steering Lucy, even though she herself made some mistakes. There were also hints that something had happened in Charlotte’s life which influenced her actions during the novel. In the second part, when Lucy is dealing with the repercussions of her trip, Charlotte is there again trying to make decisions for her and although I understand that things were different at this time, and Charlotte felt responsible for Lucy, I felt her input could sometimes be a little too strong.

Mr and George Emerson were characters that I took a little time to figure out. I think that the other characters often struggled to work them out too and Lucy herself seemed both intrigued and a little afraid of the Emerson’s. It was evident to me from the beginning with the room switching that the Emerson’s gave little regard to what was considered socially correct and they were often baffled by other character’s behaviour when their actions were illogical and driven by what society dictated. However, I felt that although George sometimes acted wrongly, he had good intentions and wanted what he felt was right for Lucy.

Lucy’s other suitor was Cecil. Cecil was very different to George and seemed to want to mould Lucy into being the girl he wanted her to be, and his mother seemed happy to encourage this. There were times when I felt he tried to influence her options and he did look down his nose at the life Lucy lived at home and was usually critical about a lot of things. I found Cecil to be a hard character to relate to and I think I was on the side of Lucy’s brother about him.

At home, Lucy lived with her mother and brother, who although seemed relaxed, were living by the rules of English society, perhaps without even realising. I liked their characters and found that they lived the way they did out of habit and seemed happy to stay that way which I understand as they knew no different and the thought of going against society was probably a scary one.

Mr Beebe was a character that interested me. He was someone that the others often looked to for guidance and I think he actually knew quite a lot about what was going on. Sometimes he seemed ready to give an opinion but held back, like with regards to Cecil. I think that although he offered guidance when asked, he was not in a position to meddle in the character’s lives, choosing instead to observe and to get involved only when asked. When he does speak he can be a very wise character and I particularly liked what he said to Cecil about Lucy:

‘[h]er quiet, uneventful childhood must end, and it has ended…she has learned what it is to love: the greatest lesson, some people will tell you, that our earthly life provides.’

There were a couple of episodes which I liked and which interested me. The first was the episode with the pond when Lucy’s brother, George and Mr Beebe all went for a dip. This episode showed me that Lucy’s brother and George had some similarities in their character and got on well. Additionally, Mr Beebe was open to their ideas and was not quite as constricted as I had thought. I also found the episodes when George and Lucy were alone very interesting. I think here I saw how Lucy was open to a different way of life but was all the while aware of her family and the rules of society so she struggled to open herself up for fear of stepping too far away from how she ‘should’ behave, regardless of what she wanted.

The end of the novel was pretty much what I had hoped for, and although some issues remained, there were hints that everything would straighten out with time. I was left feeling happy for Lucy and that she had found her own path and had allowed herself to do as she chose, rather than let herself be led by anyone else.

I would recommend this novel because although there were times where I had to re-read a passage to make sure I had understood, I think that this story is very enjoyable and it says a lot about society and classes which was interesting and a lot of the themes are still relevant today. This novel combines a lot of the things that interest me: romance stories, the role of women, how society changes and classic literature. Lastly, the Penguin English Library is really great for classic books at an affordable price with nice-looking designs.